In this tutorial, We will know about screen mirroring and how to cast or mirror your Android Screen to Windows 8, Windows 7, Windows 11, and Windows 10. Screen Mirroring is a technology that lets you project the current content on your smartphone, tablet, or computer screen to another screen without any adapters. Wireless mirroring Android screen to PC is a useful way to demonstrate presentations, play videos or movies, or share the contents of a web page or any file on your computer or mobile device.

In simple words, mirroring an Android screen to PC is a way to share your screen. Screen mirroring requires you to be present live. When screen mirroring, you are continually sending a copy of either your full screen or a single window which is duplicated onto another display.

There are several types of technology standards for screen mirroring –

It allows users to wirelessly share content on one screen to another screen or a projector. It does not support iOS.

Mobile High-Definition Link allows users to mirror the content of their phones to a screen or projector but requires a micro USB port to HDMI converter that can do the transfer, making it difficult and time-consuming. Moreover, not all phones support MHL.

There is another technology known as DLNA –Digital Living Network Alliance, considered the most powerful standard for wireless screen mirroring but supports only Sony devices.

How to cast Android screen to Windows 10/11 PC

How To Mirror or Cast Android screen To Windows 8/7

Windows 8 and Windows 7 does not have inbuilt feature for screen mirroring. So you have to install some third party application in your devices to cast your Android screen to Windows 8/7. There are lots of third party softwares available in the market for screen mirroring.In this article, we are using LetsView Free Wireless Screen Mirroring software to cast Android screen to Windows 8/7 because LetsView provides the lots of features free like full screen mode.

Using Mac? No worry watch out the below video to mirror your Android and IOS screen to Mac.

How To Use Your Android Phone As A WebCam For PC 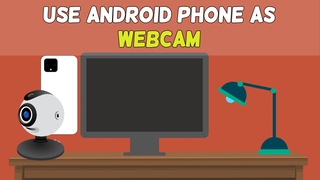 How To Use Your Android Phone As A WebCam For PC